Make the perfect hot chococlate with this Hot ChocolaTEA brewing set which contains a white enamel milk pan with our delicious herbal infused cacao powder made with organic adaptogenic herbs and medicinal mushrooms that can help support immune and adrenal health.

Raw cacao (Theobroma cacao) is known as the ‘Food of the Gods’. This ancient superfood is loaded with potent antioxidants called polyphenols, also found in green tea, along with important nutrients such as magnesium, calcium, iron, potassium, phosphorus and zinc. Raw cacao has some of the highest levels of antioxidants of any food known to neutralise damaging free radicals in the body and reduce the risk of chronic diseases including cardiovascular disease. Raw cacao has many impressive health benefits including being protective of the heart and cardiovascular system. The polyphenols in cacao can prevent bad ‘LDL’ cholesterol from clogging up arteries, they can lower total cholesterol and help reduce blood pressure.

Including raw cacao in the diet can also help keep your blood sugar levels balanced due to it being one of the richest sources of magnesium and chromium. This combined with cinnamon makes this hot cacao an ideal beverage for diabetics and for people on weight loss programs.

Raw cacao is considered a mood boosting food. Cacao also contains phenylethylamine the same chemical that’s created in the brain when you’re in love. It has a natural anti-depressant effect and can help lift your mood and increase focus and alertness. Cacao also contains theobromine a naturally occurring phytochemical (also found in tea) that boosts endorphins, your brains pleasure chemicals. These are the same chemicals that are released when you exercise. Endorphins help reduce anxiety and gives you a sense of wellbeing. Cacao contains tryptophan, an amino acid which the brain needs to make serotonin, your feel good hormone that influences your mood.

Ashwaganda (withania somnifer) is an Ayurvedic herb widely used for its adaptogenic action, enhancing the body’s resistance to physical and emotional stress. This rejuvenating and strengthening tonic supports healthy immune function, and has a calming effect on the nervous system. Studies have shown that withania can help reduce cortisol levels, our major stress hormone. Withanias gentle sedative action and toning effect on the nervous system makes it a wonderful herb for people who feel ‘strung-out’ and exhausted, and who have difficulty sleeping.

Astragalus (astragalus membranaceus) has been used for centuries in Traditional Chinese medicine as an adaptogen, helping to fight off stress and disease. Immune boosting botanical that has been long used to treat common colds and the flu. Adaptogenic herb helps combat stress while fighting disease. Astragalus also has anti-inflammatory, anti-microbial and anti-viral properties. It contains antioxidants which help fight free radical damage and protect the cardiovascular system.

Medicinal mushrooms Cordyceps, lion’s mane, and chaga are adaptogenic mushrooms as they have the ability to boost your resistance to emotional and physical stress. These medicinal mushrooms can help balance cortisol levels, improve energy levels and endurance, and can support healthy immune.
Lions mane, chaga and cordyceps are also beneficial for improving brain function. These mushrooms are considered nootropics which are a group of substances that have been found to enhance cognition, increase focus, and boost memory and learning.

Add 2 tsp of Hot ChocolaTEA powder to your milk pan and add milk of your choice. Whisk or stir and heat until warm. Add raw honey or another desired sweetener. Pour into your favourite mug and enjoy!

Raw cacao doesn’t contain any caffeine, however theobromine found in cacao, which is in the same family as caffeine, acts as a mild stimulant. Theobromine will give you a gentle, longer lasting boost in energy compared to caffeine, without the jitters and crash associated with drinking too much caffeine. Drinking cacao won’t affect your sleep and it can make you feel more relaxed and focused. 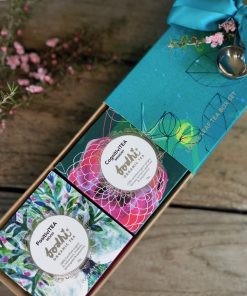